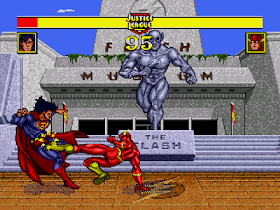 Genre: Action
Perspective: Side view
Visual: 2D scrolling
Gameplay: Fighting
Published by: Acclaim Entertainment
Developed by: Condor, Inc, Corporation of America
Released: 1995
Platforms: SEGA Genesis / Mega Drive, Super Nintendo (SNES)
A fighting game, a confrontation between Super Heroes and Super villains. You will have the opportunity to fight the following characters SuperMan, BatMan, Wondar Woman, The Flash, AquaMan, Green Arrow, Cheetah, Despero, DarkSeid. Darkseid attacks planet Earth. Along the way, the villains are destroying the military base. This is now a quest for members of the Justice League. You must choose one of the Heroes and fight against the forces of evil. Still fight with your evil clone and, in the end, with DarkSeid himself.
‹
›
Home
View web version