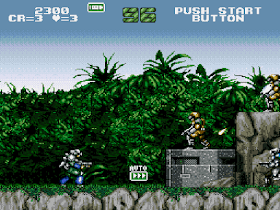 Genre: Action
Perspective: Side view
Visual: 2D scrolling
Gameplay: Arcade, Platform, Shooter
Published by: Irem America Corp.
Developed by: Irem Corp.
Released: 1992
Platform: Super Nintendo (SNES)
Arcade hit from Irem. The second part on arcade machines is even worthy of the Metal Slug series on Neo-Geo. The story of this game will be mostly negative. Since there are no particularly positive moments in it. Everything is done below average. The hero walks, picks up a variety of weapons, kills enemies, dies himself with a loud groan, and so on throughout the game. It brings great pleasure that it is possible to use various cannon mounts and machine guns, behind which the enemies were previously sitting. Even a helicopter will be allowed to control and shoot, everything that moves. Single player game.
‹
›
Home
View web version