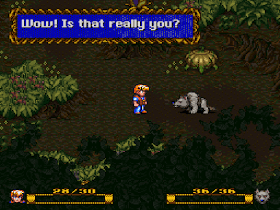 Genre: Role-playing (RPG)
Perspective: Top-down
Gameplay: Action RPG
Setting: Sci-fi / futuristic
Published by: Square Soft
Developed by: Square Soft
Released: 1995
Platform: Super Nintendo (SNES)
The story of Secret of Evermore begins with how an ordinary American teenager and his dog accidentally find themselves in a mysterious fantasy world called Evermore, created by a brilliant scientist. The characters, under the strict control of the player, will have to explore the world of Evermore, as if woven from different eras, find out all about the mysterious experiment that made the existence of such an anachronistic reality possible, and find a way to return home.
The gameplay is practically no different from Secret of Mana, released in 1993. The battles take place in real time, without transitions to the standard battle arenas for turn-based RPGs. The player controls one character to choose from, while AI is responsible for the behavior of the companion. You can switch between characters at any time (with the exception of moments when they are separated in the story). The dog is much stronger than its owner, however, it cannot talk to non-playable characters and, as a result, progress through the scenario. The main character has a choice of three types of weapons: a sword, an ax and a spear, each of which has its own advantages and disadvantages. Later, this choice will be joined by a bazooka, which requires ammunition to use. In addition to melee weapons, the protagonist also has access to a local analogue of magic called Alchemy. To use Alchemy, you need ingredients that are literally lying under your feet (the scent of a dog will help the hero search for such hidden ingredients), and are also sold in various stores.
All the music in the game was composed by composer Jeremy Sole, known for his work for the video game series The Elder Scrolls. Secret of Evermore was one of his first big projects.
Secret of Evermore received mostly positive reviews from the press. Reviewers praised the game's graphics and overall style. However, the sound design of the project and the gameplay, almost completely borrowed from the older Secret of Mana, fell under a hail of criticism. The main criticism was various ambient sounds trying to fill the silence, as well as a small number of long compositions.
‹
›
Home
View web version