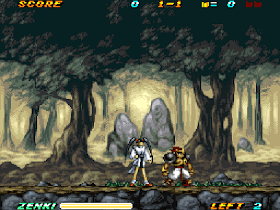 Genre: Action
Perspective: Side view
Art: Anime / Manga
Gameplay: Platform
Setting: Fantasy
Published by: Hudson Soft Company
Developed by: CA Production
Released: 1995
Platform: Super Nintendo (SNES)
Kishin Douji Zenki - Batoru Raiden is a game based on the popular anime. Your hero from level to level turns from strong to weak and vice versa. The dwarf has limitations in strikes. Muscled, on the other hand, can create an energy whirlwind, increases the speed of punches, throws a fireball and owns a super-energy punch. The game is not that difficult to pass. Annoyance is caused by the fact that when you reach the end of the level, you will stumble upon an energy field that will not allow you to go to the next location, so you will have to go back, where a stone will appear from the ground in an unpredictable place, upon destruction of which the force field will disappear. But this is not always the case, sometimes you have to turn on your ingenuity.
‹
›
Home
View web version