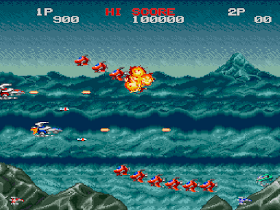 Genre: Action
Perspective: Side view
Visual: 2D scrolling
Gameplay: Arcade, Shooter
Setting: Sci-fi / futuristic
Published by: Taito Corporation
Developed by: Taito Corporation
Released: 1991
Platform: Super Nintendo (SNES)
Darius Twin is the legendary series of flying shooters from Taito. Once upon a time, an alien hostile race invaded our galactic system. A fierce space war unfolded. Many fleets were destroyed. The wreckage of wrecked ships floated in space. Earth forces suffered one defeat after another, it seemed the Earth was doomed, but they still managed to destroy one of the most powerful ships of the invaders. After much exploration of the wreckage, some alien technology has been incorporated into the new Darius-series ships - a last chance for a more technologically advanced alien fleet to resist. A distinctive feature of this series of flying shooters was the ability to select a zone after each completed level. Here, this feature is also implemented and leads to different endings. The game has five endings in total. The alien race probably studied our planet for a long time in the depths of the giant ocean, and decided to recreate their ships in the image of their harmless neighbors. The appearance of enemies - this is another feature of the series, then they are presented in the form of giant mechanical fish, shellfish and all sorts of other arthropod creatures. Darius Twin is a good game for 1-2 players. A quality sequel to Super Nova/Darius Force was released for the Super Nintendo.
‹
›
Home
View web version