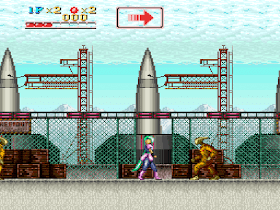 Genre: Action
Perspective: Side view
Visual: 2D scrolling
Gameplay: Arcade, Platform
Setting: Sci-fi / futuristic
Published by: Atlus U.S.A.
Developed by: Hori Electric Co.
Released: 1993
Platform: Super Nintendo (SNES)
All fans of such a cult hero as Strider, who shone in many Capcom series, are advised to familiarize themselves with this game. This game appeared at the initial stage of the existence of the Snes console and perfectly duplicates the first games about Strider, being almost a masterpiece clone of it. Unlike its predecessor, the game features two characters, and, accordingly, the ability to play with a partner. Your pair of androids, codenamed Alow and Sewa, must eliminate the consequences of the terrible human factor and chemical pollution of the planet, which simply changed the entire appearance of the living Earth, populating it with infected, mutated people and all sorts of hostile organisms. Throughout the battle path, you will have to use swords and actively move forward, climbing walls and climbing ceilings. In some locations, several bosses are presented, which are made in a very pleasant manner, with menacing manners and different characteristics. Even sometimes an analogy is made with the similarity of building levels from the legendary Contra, only in the hands of our duo here is not a firearm. Also, the game is accompanied by nice effects available from SNES. For example, the idea of a fight on a fighter jet that performs a dead loop is very good, etc. In general, our heroes, although created for this, must again save the world for people, not caring about their own lives, hoping that future generations will be much more prudent. For this, they give them hope for a new life, a wonderful future and an opportunity for the revival of the Living Planet, that bright world that numerous people could not support for their children, destroying it with their greed. Decent fighter for 1-2 players.
‹
›
Home
View web version