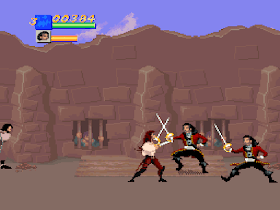 Genre: Action
Perspective: Side view
Visual: 2D scrolling
Gameplay: Fighting
Published by: LJN
Developed by: Software Creations Ltd.
Released: 1996
Platforms: Super Nintendo (SNES), SEGA Genesis / Mega Drive
SNES already has a great beat 'em up about Pirates of Dark Waters. This one is also not very bad, and also based on popular characters, but already on the plot of the film of the same name. Morgan Adams - the fighting daughter of the deceased pirate inherited a part of the Cutthroat Island map with the designation of the place where countless treasures are hidden. The second piece of the map is held by the rogue and adventurer William Shaw. But the main problem is that the last part of the map is in the hands of the evil and treacherous Uncle Morgan - a pirate nicknamed "Dog". In general, the heroes now embark on a combat path, use their swords, fists and legs, pick up a variety of weapons and disperse a crowd of thugs and barbarians. And all this for the sake of adventure, which should lead them to the lost treasures. Whether there will be such an ending - you will find out by passing Cutthroat Island. Good game for fans of the genre.
‹
›
Home
View web version