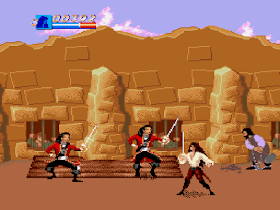 Genre: Action
Perspective: Side view
Visual: 2D scrolling
Gameplay: Fighting
Published by: Acclaim Entertainment
Developed by: Software Creations Ltd.
Released: 1996
Platforms: SEGA Genesis / Mega Drive, Super Nintendo (SNES)
The game is based on the movie of the same name Cutthroat Island with Geena Davis in the title role. You, as one of the heirs of the treasure map, must find the missing pieces of the map and get to the treasure island. You can do this both alone and in cooperative mode (two players). Naturally, it will be easier to go through this game together than one. You can use various weapons in the game: knives, bombs, bottles, torches, hammers, pistols and other weapons, if you manage to find them. The levels are also varied, in general, it will not be boring.
‹
›
Home
View web version