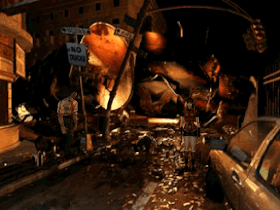 Genre: Action
Perspective: 3rd-person
Visual: Cinematic camera
Gameplay: Puzzle elements, Shooter, Survival horror
Interface: Direct control
Setting: Contemporary, North America
Narrative: Horror
Published by: Capcom Entertainment
Developed by: Capcom Co.
Released: 1999
Platforms: Nintendo 64 (N64), PlayStation (PSX, PS1)
Resident Evil 2 is the sequel to the game of the same name. This part is considered the most popular game from this series, as it surpasses other parts in terms of sales.
What can be said about the gameplay ... In comparison with the first part, there is progress. The game has become faster and more dynamic. The gameplay has been reduced and, probably, unfortunately, has become easier. Riddles are much simpler and more standard, and quite easy to solve. It became possible to pass locations in several ways. Non-linearity, of course, will please any player, and, perhaps, will encourage you to play the game more than once. The inventory actually remained the same, but the weapons have changed. The old has been improved, new samples have appeared. Also, it became possible to upgrade weapons during the game. The game is exciting, and this is probably the most important thing.
The gameplay has also changed. In the first part, the player chose one character, and went through the game for him, only occasionally intersecting with the second hero. Everything is different here... There are two scenarios in the game, and the events revolve around two characters. In order to fully go through the story, and consider every moment in detail, you need to play for both.
The graphics of the game are quite good. The models of the main characters are simply amazing. There are no complaints about animation either. I especially want to speak warmly about the soundtrack of the game. The compositions sound "in the theme", the soundtrack is above all praise, the voice acting is quite successful.
Well, about the plot ... S.T.A.R.S start a fight with the pharmaceutical company Umbrella. But a virus suddenly appears in the city, turning people into zombies. Now the first goal of the heroes is to survive... And, of course, they have to understand this situation and find out the causes and sources of the disaster. There are more and more questions and therefore more and more answers to be found...
‹
›
Home
View web version