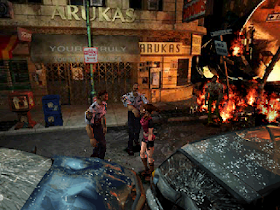 Question: I went through scenario A for Leon and script A for Claire, but I can not find the Unicorn Medal and one of the keys. I opened all the doors. True, I could not open one, though, and did not find a lighter. Can you tell me what I'm doing wrong and what should I do?
Answer: In order to find the Medal of Unicorn Medal, look under the diary in the office of STARS Office. Clearly, we can not know what key you missed, but you can find the lighter on the seat in the Save Room room when you exit from the upper tier of the Main Hall.
- Question: I play the script on Claire Redfield and can not find the second half of the blue Jaguar Stone. I managed to find the first half when I decided a puzzle with a clock. Do not tell me where to find the second?
- Answer: The second half of this stone you will find after solving a puzzle in the Storage room, placing two Red Jewels on both sides of the stone. To get one red stone, you must light a fireplace in the Briefing Room using the lighter found on the second floor in the room with the shipment point (2F Statue Hallway), and get the second red stone after you install the statue on the 2F Statue Hallway.

If you search the table on the left side of S.T.A.R.S. office, you will see the inscription "It's tracked someone must have searched if." However, you can search it many times (sometimes up to 50) while you find the film's rudder. Take it to the Dark Room and see a portrait of Rebecca in basketball uniform. And what did you expect to see?
‹
›
Home
View web version