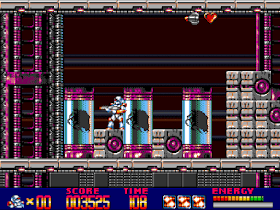 Genre: Action
Perspective: Side view
Visual: 2D scrolling
Gameplay: Platform, Shooter
Setting: Sci-fi / futuristic
Published by: Renegade Software
Developed by: Factor 5 GmbH
Released: 1993
Platforms: Amiga, SEGA Genesis / Mega Drive
The last part of the epic about Turrikane. The plot of the plot is standard: many generations have passed since the last part, and evil again invaded the galaxy and began to torment innocent people. Our hero (whose name, by the way, is actually Bren) could not just look at the outrages taking place and put on his famous costume ...
The gameplay is pretty standard for a platform game: jump, shoot; periodically there are mini-bosses or arcade elements when you need to dodge falling slugs. The explanation is simple: the game was positioned, among other things, for the SEGA Genesis / Mega Drive market, where the game was released under the name Super Turrican. As a result, we will not meet that furious complexity and level design, and there are no proprietary Amiga gradients. Enemies are barely crawling and do not pose a real threat to the player. But not everything is so bad: the graphics are quite beautiful, especially starting from the third level; the game has additional superpowers like a hook that can cling to platforms, and the music of Chris Huelsbeck and Jochen Hippel is wonderful as always.
‹
›
Home
View web version