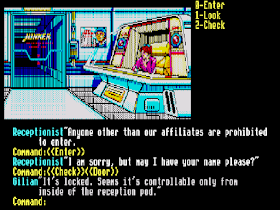 On the title screen, press 0 key (Run Game). "Insert Disk 1,2" - Press keys 0 and 4 at the same time, then 0 and 5.
Genre: Adventure
Perspective: 1st-person
Art: Anime / Manga
Gameplay: Japanese-style adventure, Quick Time Events (QTEs), Shooter
Setting: Cyberpunk / dark sci-fi
Narrative: Detective / mystery
Published by: Konami Industry Co.
Developed by: Konami Industry Co.
Released: 1988
Platforms: MSX, SEGA CD / Mega-CD
Hideo Kojima - now this name is known to many, deservedly known. Trite, but it is with his mention that most reviews of the game in question begin. Further, it is also tritely described from what moment the masses began to respect the illustrious author of the Metal Gear Solid series, which thundered through all the cities and towns of our vast planet. Then comes the catchphrase, something like: “few people know, but the talent of this Japanese uncle is not the only Metal Gear…” . As a result, the reader is smoothly led to the strange word Snatcher. The most interesting thing is that not many people want to break stereotypes, and I do not want to. It’s just that there is a regular piece of information that everyone who has the courage to sit down for an old game, born back in 1988 on an even older platform, in the dark depths of the then not particularly famous Konami company, should know.
Snatcher is not an RPG. Not really an RPG, and not at all what the consciousness projects at the mention of a familiar abbreviation. There is a great storyline, memorable characters and a combat system, but there are no experience points, no hordes of various opponents, no mountains of weapons, no abundance of cities.
There is only one city - NeoKobe - the cradle of crime, a large anthill created at the junction of continents, where representatives of different nationalities who survived the biological catastrophe and the Third World War try to coexist. There is only one enemy - the unknown. The obscurity of the past and the lack of confidence in the present, the physical shell for which are the creatures that flooded NeoKoub. They kill people in positions of power and then take their place. These are bioroids - machines that received the name Snatcher for their deeds. Opposite to the horror that enveloped NeoKoub and the embodiment of the virtual "I" here is Gillian Seed - a man without a past, found with his wife in the closed territory of Siberia three years earlier than the real events. He joins a special unit for the destruction of Snatchers - J.U.N.K.E.R. A small staff as a result of frequent deaths and high demands, the most modern equipment, and the basis of the organization are junkers, hunters shackled by a ban on human sacrifice, forced to carefully, step by step, approach the intended goal.
And above all this, the plot prevails - a mystery leading from event to event, hidden under a touch of cyberpunk. She intrigues throughout the game, never revealing herself to the end. You can find out the true ending only in later (added) re-releases of Snatcher or in a semi-parody and already one hundred percent RPG with slightly shoveled facts SD Snatcher (also on MSX).
However, no more is said about this story. The plot is the main plus, even with an eye to incompleteness, and therefore, avoiding the innocence of unnecessary phrases, let's switch to ...

Process story. The basis of the “digital comic”, proudly stated at the beginning, is moving between the scenery and then exploring them. By “research” is meant various kinds of data collection and analysis in order to extract information necessary for further action. Somewhere for this you will need to talk to the informant, and somewhere just look at the same place several times. The above is the essence of any work characterized as a digital comic. What sets Snatcher apart from other representatives of the genre and brings it closer to role-playing games is the presence of inventory and a combat system. The first is a stereotype worn out over the years, the second is simplicity bordering on genius. And although the direct confrontation between the junker and the snatchers in the game was a real cry, they were clearly realized under the influence of a flight of thought, and not from its chaotic movements. Yes, and you can always train your skills in a special room designed for this. In short, combat is a shooting range. The screen is divided into nine parts, and opponents randomly start to appear in different sectors. By pressing one of the nine buttons (numbers under NumLock in the emulator layout), each of which corresponds to a certain sector, the player shoots the corresponding place from the blaster, not forgetting to hold the other button (shift) before that, which is responsible for pulling out the weapon. That is, everything is simple, interesting and in real time. I mentioned the buttons in brackets because of the non-standard control. You see, the MSX came with a keyboard, and unlike other games, Snatcher decided to make the most of it. For example, in order to perform an action, you have to use the key associated with this action, or, more simply, the numbers from 0 to 9. Which, it seems, is not too inconvenient, but rather unusual.
Graphics are changing static pictures that characterize a particular location. These are the very pictures the game can rightfully be proud of. Well-drawn, with decent detail, and sometimes even slightly animated, they helped create that unique atmosphere that Snatcher is saturated with, even though they occupy almost a third of the screen. I will say more: all the differences between similar “backs” in the SegaCD version are related only to their size and the palette used, but not to detail. And, by the way, the lack of color of the scenery from MSX is much more suitable for the world of cyberpunk than the cartoonish coloring seen in the reissue... And the girls here, by the way, are prettier...
The music was also frankly delightful. Disturbing, tense compositions, replaced by a series of sad-melodic tracks, literally fill the snatcher's world, making it even more atmospheric. No, today, when a gamer brother is simply inundated with high-quality game music, the snatcher sound will not blow the roof off with its originality, but for 1988 this is simply an exceptional event. As if confirming this thesis, most of the melodies subsequently migrated to the remake. You have to think it's a no-brainer.
To be honest, I don't like to divide good games into advantages and disadvantages, but when it comes to such a veteran of the gaming front, you have to give up principles. Yes, 1988 release makes itself felt. The already mentioned small windows on which the action unfolds, a nasty sound, and slow loading when changing pictures - that's what awaits a person who dares to sit down at Snatcher today. The fun is also added by the fact that the game in the original was on three MSX media, that is, disks, as a result of which VERY often, when moving to a new location, an annoying caption on the screen will advise you to change the disk again and again ... Needless to say, that the whole process basically consists of transitions between locations? And if you suddenly have a desire to make a save - think carefully, because the next annoying caption will immediately punish you with an inscription about the need for a new disk replacement.
This is what I'm afraid of. If it's really scary, then know that the rational setting of the emulator allows you to get rid of most problems. The pictures won't be any more, but here's the sound and speed... The most interesting thing is that by adapting the emulator to the performance of the original MSX, you can go with a clear conscience and sleep well like that, or give an oak from slowing down in the first 10 minutes of the game. However, once upon a time it was the only way they played and even enjoyed it ...

Developers, finalizers and other higher matters...

Japanese. The language of the gods of the game world and the satan of any emulator that does not have samurai roots. Yes, it was the language that became the reason for such a narrowly focused popularity of the snatcher among the people. This orientation was focused more on the people of the Land of the Rising Sun than on the rest. It is understandable: the eighties are not the time for wholesale localizations of the Japanese. Yes, and there was something about Snatcher that was rejected by publishers in other countries - it was not childish. The main thing is that there is nothing above the norm in the game: well, an interesting picture will flash somewhere, well, they will show a little blood, well, finally, they will joke about the relationship of the sexes. Now in any of the most overlooked films of this bulk. And in modern games, no one has been paying attention to this for a long time, and it is shocking, except perhaps for Uncle Kondrat, who took a vow of celibacy and settled on a desert island, who saw the highest goal of existence in renunciation of worldly temptations. That is, for the present world - nonsense, but for the end of the eighties ...
In general, during the lifetime of his MSX, he never knew the official English version of Snetcher. This adventure from Kojima reached us only when romhackers got down to business ... As a result, now MSX also has Snatcher in English, for which once again many free thanks to romhackers. It is worth saying that at least there are a lot of games on the aforementioned computer, but if we consider them in a qualitative equivalent, then we can be sure that most of them are frankly junk, all the more gratifying that such a worthwhile thing was awarded the translation.

This story is dedicated to all “cyber punkers” who fight in this world filled with treachery.

And there is nothing special to sum up. Here it is - Snatcher. The very first. The darkest. Breaking off in mid-sentence and not yet cut by the scissors of censorship. Cult in its purest form. A classic, few of them. And although now in English, but definitely not for everyone. Archaism and unusualness destroy the reasons for recommendations, and let's reduce the paradox of generalizations into one sentence. Those who feel sympathy for the genre - play, those who do not feel - do not play, the rest - try. 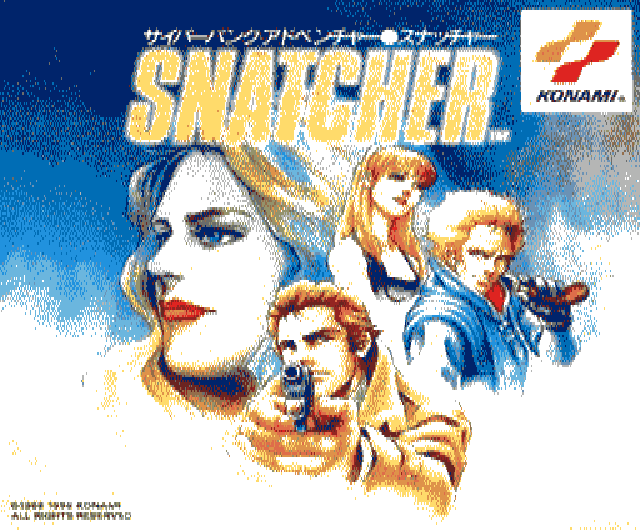