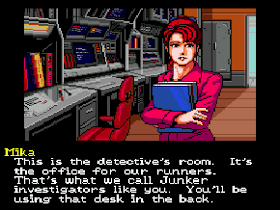 Genre: Adventure
Perspective: 1st-person
Art: Anime / Manga
Gameplay: Japanese-style adventure, Quick Time Events (QTEs), Shooter
Setting: Cyberpunk / Dark Sci-Fi
Narrative: Detective / Mystery
Published by: Konami (America)
Developed by: Konami Co.
Released: 1994
Platform: SEGA CD / Mega-CD
Game Snatcher popular Cyberpunk Adventure. Inspired by many popular films: Blade Runner, Wicked City, Akira and The Terminator.
Everything starts in Moscow on June 6, 1996 (in the Japanese version of the game for NEC PC-8801 and MSX 2 in 1991, as it was the future at the time of the game, and there is already no version for Sega Mega-CD). Where the chemical weapons of Lucifer-Alpha are being developed. As you have noticed, all this is happening in Russia. And, naturally, there is a leakage of biological weapons, which leads to the death of 80% of the Eurasian population. And this is half the world's population. Decades after the disaster, the virus became harmless, but a new threat appeared, exactly 50 years later. This is a new artificial life form called differently as bioroids, similar to the Terminator, they are also known as "Snatcher" (Robbers / Thieves). They began to appear on an artificial island in the city of Neo Kobe. They kill the inhabitants, no one knows who they are and where they come from.
The action of the game takes place in 2047. You play for Gillian Seed. He has amnesia, but this does not prevent him from working in Anti-Snatcher in the department of J.U.N.K.E.R. - Japanese Undercover Neuro-Kinetic Elimination Rangers. Your task is to understand all this and find a connection between them and you.
The whole game consists of 3 acts. The Snatcher game version for Sega Mega CD, which is the port of the game with the PC Engine CD, was censored, not only violent scenes and explicit scenes for adults were cut or replaced, but many aspects of the game were also changed, for example, Snatcher robots less similar to Terminators.
Basically the whole game consists of conversations, you have a menu for selecting different actions. But you also have to look for items, solve small puzzles and even shoot in some places. This can be done with a light gun (Konami's Justifier light gun). An interesting fact is that you will be accompanied by the robot Metal Gear Mk.II. And it's not surprising, because the same team worked on this game (Hideo Kojima), as on Metal Gear.
Later there were versions of games for Sega Saturn and PlayStation.
‹
›
Home
View web version