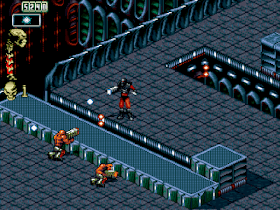 Genre: Action
Perspective: Diagonal-down
Visual: Isometric
Gameplay: Shooter
Setting: Sci-fi / futuristic
Published by: Core Design Ltd.
Developed by: Core Design Ltd.
Released: 1995
Platforms: Amiga, SEGA Genesis / Mega Drive
One of the late "classic" Amiga games published by Core Design before they left for PC for Amiga, Amiga CD32 and SEGA Genesis. The game turned out to be very unusual, ambiguous; the only thing that is not in doubt is the level of graphics, which is amazingly cool! And it's not so much about the graphics itself, but about the overall design and incomparable music of Martin Iveson (Nuke), who in just three files was able to turn the idea of ​​tracker music in games, creating a unique atmosphere. The creators of Skeleton Krew are actively exploiting the cyber-gothic theme - with skulls, blood, zombie monsters and alien mutants. A lot of things are mixed up in the game, but it turned out to be extremely stylish.
Skeleton Krew is a team of three heroes, Spine, Rib, Joint, which, under your control, must clear four planets (Earth, Venus, Mars and the mutant base - Psychogenesis) from the minions of the main villain of the game - Moribund Kadaver . Having chosen one of this trinity (or two, if you play together), we find ourselves in the isometric corridors of the first level. And here we have to face the first of the ambiguous qualities of the game - its management. In the settings, you can choose several ways, but all of them are unusual: the fact is that we need to control the movement of the hero himself and the direction of his shooting at the same time. The authors tried to make the controls as convenient as they could, but, one way or another, you will most likely have to get used to it for a while.
By genre, we are dealing with an isometric action - we shoot everything that moves, we move along the level to the exit. But it should be noted that the levels here are short and varied in a prefixed way, and despite only two types of weapons, you will have to think to pass: certain enemies are much easier to deal with using only one of them, but other tricks will often be required.
The authors can be forgiven for endlessly appearing enemies (especially since, according to the plot, these are mutants that are constantly produced at the factory and teleported to battle with you), but I can’t find an explanation for the slowdown with a large number of enemies on the screen in the game from such Amiga masters, especially that nothing of the kind was noticed in the prefixed version (there, of course, there are smaller colors and resolution, but still). I would like to see in the game both the password system, which the version for Sega boasts, and cutscenes from the same place, and in terms of gameplay, that version is somewhat more interesting (more different enemies, more dynamic gameplay).
If it were possible to combine the gameplay of the console version with the audiovisual part of the Amiga game, it would not be worth the price. But even so, we have an extremely stylish isometric action game, which I can rightly recommend for review as one of the highest points of the Amiga in technical terms, on the one hand, and as a very atmospheric game, on the other.
‹
›
Home
View web version