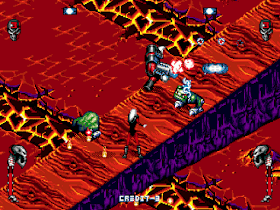 Genre: Action
Perspective: Diagonal-down
Visual: Isometric
Gameplay: Shooter
Setting: Sci-fi / futuristic
Published by: Front Street Publishing
Developed by: Core Design Ltd.
Released: 1995
Platforms: SEGA Genesis / Mega Drive, Amiga
Cool game similar to Syndicate. We are given three heroes to choose from - a man, a woman and a kind of cross between a gorilla and a hippopotamus. Having chosen a hero, we get to the levels, destroy enemies and collect prizes. The graphic side of the game does not cause concern, everything is in order with the sound. Only one thing scares - very difficult control, or rather not it itself, but the fact that shooting in these "three dimensions" is quite difficult. However, two can play.
‹
›
Home
View web version