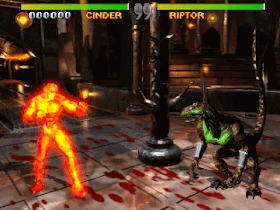 Genre: Action
Perspective: Side view
Visual: 2D scrolling
Gameplay: Fighting
Setting: Fantasy, Sci-fi / futuristic
Published by: Midway Manufacturing Company
Developed by: Rare Limited
Released: 1994
Platforms: Arcade Machine, Super Nintendo (SNES)
The game is made in the Fighting genre, where you play the role of a fighter participating in a tournament created by the sinister Ultratech, who is the main person in these experiments, in order to choose the best, in the end your main task is to survive. Thematically, the game is made in all the traditions of the famous Mortal Kombat, namely, fierce battles of assorted fighters await you here, of which there are a dozen, you can end the battle with a spectacular killing move or humiliation of the enemy. All battles here take place in non-stop mode, i.e. there is no time for a break, and health is not added after the first battle, so you must always be on the alert. As for the gameplay, it differs from the above-mentioned game in that you can operate with a huge number of combinations of techniques that grow into large chains, which in its dynamics resembles "brutality" from MK, in a word, "hardcore players" will have a place to roam. Graphically, the game is made in the form of a golden mean: between 3D and 2D, which looks quite impressive. In general, we can say that this is a worthy competitor to MK.
‹
›
Home
View web version