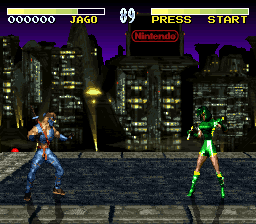 Genre: Action
Perspective: Side view
Visual: 2D scrolling
Gameplay: Fighting
Setting: Fantasy, Sci-Fi / Futuristic
Published by: Nintendo of America Inc.
Developed by: Rare
Released: 1995
Platform: Super Nintendo (SNES)
The first part of this amazing fighting game was released in the 94th year. Initially, it was ported to a gaming machine based on Ultra 64. At that time, the game made a real sensation, quickly gained immense popularity among fans of fighting games around the world, resulting in the game also ported to SNES and GB. Now we are talking about the most perfect, about the arcade version of the game, but much of what is said here applies to the version for SNES. Star composition of developers and publishers - Rare, Midway and Nintendo - has justified the most exacting expectations of fans of fighting games, showing the world a game that influenced the further development of the industry of 2D fighting games (now undeservedly forgotten by developers). The "Assassin's Instinct" fully justified its name, but more on that later. In an attempt to expand the game's possibilities, the developers managed to surprisingly organically reunite in the game elements that seemingly are not very compatible, but Rare and Co. managed to do something that many failed and that they themselves, unfortunately, most likely, will not be able to repeat. It would not be very fair to consider Killer Instinct another killer of MK, for Midway itself participated in the creation of this game - the creators of the legendary Mortal Kombat series. It is worth noting that during the development of KI, the creative potential of Midway was clearly at the peak of the perfection of creative thought, the most striking example being the excellent MK II, which developers could not outdo. Rare and Nintendo in the presentations also do not need. For those who for some reason do not know who they are, I will answer. Rare - the manufacturer of the best games of the genre "adventure" for Nintendo, for one only magnificent Donkey Kong Country for SNES they can put a monument. So, let's get started.

At a time when developers were still trying to translate games into 3D space, and 2D ones did not even think about dying, Killer Instinct was the most beautiful, and, at the same time, the most technologically advanced fighting game. 2D fighting games have overtaken and continue to overtake the dynamism of their 3D brethren, and performed on the Killer Instinct silicone technology is no exception. For all the beauty of the animation and the apparent volume of characters, KI retained all the 2D specifics. If you want to imagine what it is, imagine a fight between Jax and Motaro in MK 3 in a semi-3D and with more sophisticated brutal beats, connected in long combos and conducted with the speed inherent only in 2D fighting games (for example, the same MK), and you get an approximate picture of what you can see and feel in this game. Even after almost 14 years, Killer Instinct looks more than competitive against the background of other 2D fighting games, leaving behind most of the games that ever appeared on arcade machines and consoles - I think that's quite enough. Sounds and music in the best traditions of Midway, with only one small nuance - the game realizes a lot of real songs, and for all the seeming stylistic disunity (from rap, pop music to disco and metal), they surprisingly organically fit into the atmosphere of the game and do not interfere, even on the contrary - they charge an additional drive during the match. Initial melodies in general are just a fairy tale: after the first acquaintance with the game you will want to hear them again and again, for their sake every time you want to revise the intro and delay the choice of the character. Also pleasing are the pretentious cries of the commentator like "Ultra Combooo!" or "Co-co-combo Breaker!" - Soul singing right, honestly. In general, smart, other words can not be found.

The plot of the first Killer Instinct personally reminded me of the legendary film "Running Man": UltraTech Corporation, with the expectation of increasing the prestige of its organization, and also testing new combat vehicles, regularly conducts death tournaments broadcast on cable TV. In the new tournament, 10 bidders take part, each with its own mission: Chief Thunder wants to take revenge on Spinal for his brother's death, Glacius - to return to his native galaxy, T.J. Combo wants to just make money, the victims of the experiments Sabrewulf and Cinder - to bring back the human form, etc. Admittedly, the plot in Killer Instinct is pretty trivial and seriously does not hold out to everything else, but, in my opinion, given all the features of the game, the best plot for Killer Instinct was really difficult to come up with, therefore, I see no special reason for criticism, worse, it's still a fighting game, not an RPG.
The selection of characters for Killer Instinct was truly original, and all of them organically got accustomed to the game - this is one of those few fighting games where you absolutely like ALL characters! And these are not empty words. Indeed, each character in the first part of Killer Instinct has its advantages and disadvantages. Of course, some characters as they become acquainted with the game and individual "sharpness" in the management of time begin to fade into the background, but most often it happens until you learn all the combat capabilities of this fighter (usually in such cases to help come demki , but, unfortunately, now it is extremely difficult to find them, if at all possible, and it remains only to read the reports on the matches). The only exception is that Cinder, and even then they vryat. Matching the characters of the game concept makes us once again marvel at the talent of the developers. Killer Instinct fighters are real killing machines, each of which is endowed with truly destructive capabilities and unique characteristics.

Management in the game is not ideal, but very, very affordable and perfectly balanced - depending on the chosen character, the complexity of mastering grows and, in this case, it is not another handwritten stamp (yes, it really is). Having talked about management and gameplay, I just want to mention such an integral, I would even say, dominant part, as a combo - in the game there are 12 varieties of combinations, the longest of which is called Ultra Combo and is a bunch of 21 to 32 strokes. For sure everyone remembers Brutality in MK 3 Ultimate. So, in KI these very Brutality are performed right during the match and, as I said earlier, look much tougher in my opinion than in the aforementioned Mortale, with all due respect to him. At that time, no game could boast of such a long series of punches in a bunch. The ease with which these combinations are performed is both a plus and, in the opinion of some, a tangible minus of the game, which I dare not agree with. Firstly, there are so-called Combo Breakers, which allow ripping any series with causing damage to the attempted ones. Secondly, and here it's not so simple, it's possible to do strikes in series with a delay, not giving the chance to interrupt the combination of Combo Breaker. As a result, "noobs" in matches with experienced players had virtually no chance. There is also a kind of combo like Turbo or Speed ​​Combo - this combination is performed immediately after the break of the enemy series Combo Breaker and its main difference is that this combination is very difficult to break. As for the additional interesting aspects of the gameplay, one can not help but mention the endings that occupy the last place in the game: 1) No Mercy - analogue of Fatality in Mortal Kombat; 2) The production can be linked to the final series of punches, such a series is called "Ultimate Combo" and, like Ultra, is performed at the end of the match; 3) Standing at the edge of the enemy's roof can be thrown down during the finishing (and to do it quite easily - any super-blow). Among other things, the game still has such a thing as Humilation - you can not finish off the opponent, but simply humiliate at the end of the fight (fun in the spirit of Friendship again from the unforgettable MK, which has already been compared with KI). One can not help paying attention to one more nuance that distinguishes the game from the heap of it: there are no rounds in the game as such, which, in my opinion, is a very successful solution (coupled with the possibility of automatic finishing), expanding the boundaries of the game process. They took one strip of life - a pause for respite, removed the second - a corpse. No you Final Round, etc.
To summarize, I want to say that the game is fascinating literally from the first minutes, demonstrating just an amazing replay value when playing with a live opponent and very decent against computer opponents! At one time Mortal Kombat was somewhat more popular than Killer Instinct, but now I know a lot of players who can not even be forced to play, say, in the third or the first MK, while Killer Instinct is still excellently played both in variant for the gaming machine, and on the same SNES. 5 levels of difficulty - Extra Easy, Easy, Medium, Hard and Extra Hard - will satisfy the needs of both beginners and more experienced players (NOT masters). In addition, each of the characters has a personal ending / movie, which further warms interest in the re-passage of Killer Instinct for different characters. The game is capable to surprise the most demanding gamers and, undoubtedly, it is necessary to liking all those who like original, dynamic and really easy to master the basic principles of fighting games.
‹
›
Home
View web version