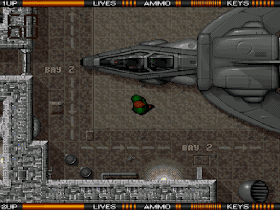 Genre: Action
Perspective: Top-down
Visual: 2D scrolling
Gameplay: Shooter
Setting: Sci-fi / futuristic
Published by: Team17 Software Limited
Developed by: Team17 Software Limited
Released: 1991
Platforms: Amiga, DOS
Interestingly, Alien Breed was heavily based on the Alien movies (unofficially). The gameplay consists of the following: the player will get to the level with aliens, his goal is to blow up the level on which he is now located, and find an elevator leading to the lower level. Subsequently, these steps are repeated.
‹
›
Home
View web version