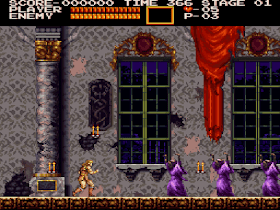 In the Japanese start menu with a black background, press the 1 key and wait 30 seconds for the Konami logo to appear. OS menu for swap disk - R key.
Genre: Action
Perspective: Side view
Visual: 2D scrolling
Gameplay: Arcade, Platform
Setting: Fantasy
Narrative: Horror
Published by: Konami Co.
Developed by: Konami Co.
Released: 1993
Platforms: Sharp X68000, PlayStation (PSX, PS1)
In 1993, a remake of the first Castlevania was released in Japan on the Sharp x68000 computer. The plot in it is absolutely the same as in the 8-bit original: Simon Belmont, obeying a sense of duty, picks up the family whip and goes to Dracula's castle in order to calm the resurrected vampire.
In technical terms, everything remained practically unchanged, except that an interesting additional weapon in the form of a laurel branch was added. Yes, this miraculous plant is borrowed from Simon's Quest and has the ability to add most of the HP, while taking 10 hearts. In addition, Simon is now controllable while jumping, and can also whip down and diagonally while in the air.
The layout of the castle, thanks to the greater capabilities of the Sharp x68000 than on the NES, has been improved and enriched with new stages. Accordingly, new accompanying melodies were added. The graphics are beautifully detailed, the backgrounds are beautiful and original (what is worth the decoration in the long corridor on the outskirts of Death). But there is no smoke without fire. Likewise in this case. With all the colorfulness and fascination of the game is very difficult. Only the most stubborn and patient will overcome all eight stages.
Not all the bosses of the first Castlevania made it into the remake, but they did find some very interesting replacements. Particularly impressive are the werewolf girl and the mirror clone of Simon. Well, in the finale, as always, you will fight with Count Dracula himself in two guises - human and demonic.
‹
›
Home
View web version