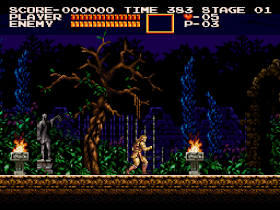 Genre: Action
Perspective: Side view
Visual: 2D scrolling
Gameplay: Arcade, Platform
Setting: Fantasy
Narrative: Horror
Published by: Konami of America
Developed by: Konami Computer Entertainment Tokyo
Released: 2001
Platforms: PlayStation (PSX, PS1), Sharp X68000
Sharp X68000 is once a popular personal computer in Japan, neither in America, nor in Europe this thing did not appear. The company KONAMI released for him some of their famous games, among them was Castlevania. And since this title was not seen by any Japanese eye, in 2001 KONAMI releases a remake for the most widely used prefix of that time - Playstation. Among the improvements are: new cutscenes, a new character design developed by Ayami Kojima (an artist who brought the glory of Symphony of the Night), recycled the main character's sprites, improved music and more balanced level of complexity. The American edition also contains an art gallery with works by Kojima for Chronicles and Symphony of the Night, as well as interviews with the producer of the series - Koji Igarashi.
Initially, this special incarnation of Castlevania was supposed to be a remake of the original game. The first level is practically the same, the seventh is also very similar to the fifth level (laboratory) from the original, but with some additions and in general the design of all levels has direct references to the old, kind CV1. But now, instead of six levels, there are eight. In addition, there were many elements from other Castlevania games, such as swinging pendulums in the watch tower of CV3, mud zombies from CV3 and CV4. Yet there is enough innovation to not count the game as a "step back".
In fact, all these innovations, once again highlighted what wonderful game designers from KONAMI. For example, on the second level, you have to climb incredibly fast on the raft while, the platform on which you stand will be gradually destroyed. Ice cave, with moving blocks, which strive to push upwards, on carefully located spikes. Dolls are murderers who suddenly come to life and attack Simon. There really is a large number of different interesting enemies, and they are found everywhere in the game.
The plot line is the same as in the original - take on the role of Simon Belmont and go to the destruction of Count Dracula. The gameplay of the classic Castlevania'i has not undergone a major change, although you can change the direction in the jump, no "freaks" a-la whip, attack up, back flips, etc. etc. there is no. But there are all four types of regular specials. weapons, plus a very cool grass that restores your health, but, of course, it is very rare.
The visual level of the game is very similar to Super Castlevania 4. The figure of Simon is painted in dark brown tones and causes an acute attack of nostalgia for the Dandy. Well, the music in the game is something! There are remixes of old tunes and amazing new music. At the beginning of the game there is a sound test, in which besides listening to these songs you can see their names.
Complexity in the game is very, very high. Although it is unlikely to cause any problems for avid players in Castlevania'y, but it may just anger everyone else. Especially the difficulties will begin after the fifth level, where, in fact, you die after five strikes, and at the same time you have only four lives.
Now a little about the main improvements in the version for the Playstation. There are two modes in the game: Original - this mode reveals to you that very original game from the ancient Japanese Sharp X68000 PC, all one-to-one, even offer to choose a MIDI module for different in quality and sound sound design. Arrange Mode - offers an already improved Playstation version, here and the choice of complexity and improved graphics with sound (by the way, to select alternative sound modules in the American version of the game - hold L1 and R1, then click start, all this must be done on the main screen where you can choose the game mode: Original or Arrange). The difficulty level is now perfectly balanced. And even if you put Hard, the game will still be easier than on the Sharp X68000 - this will allow many "unprofessional castlemans" to fully enjoy the game.
The remaining changes in the game are not so significant. Repainted sprites of Simon and Dracula - Simon now with red hair. Music is remixed in places, new tracks are very pleasant on hearing. There are a lot of new sound effects. Added videos to the beginning and end of the game - the initial movie is not inspiring, but the final one - the destruction of the castle - is made simply superb. After passing the game, a new mode of Time Attack will open (pass levels for a while), as well as the ability to select a level. That seems to be all.
To say in the end, you can only one - an excellent remake of the classic Castlevania.
›
Home
View web version