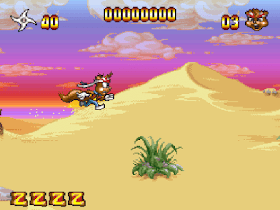 Genre: Action
Perspective: Side view
Visual: 2D scrolling
Pacing: Real-time
Gameplay: Platform
Interface: Direct control
Setting: Fantasy
Published by: Sun Corporation
Developed by: Iguana Entertainment Incorporated
Released: 1994
Platforms: Super Nintendo (SNES), SEGA Genesis / Mega Drive
On the Sega Genesis, I remember, Zero was one of the leading platformers, competing with Sonic itself. On the Super Nintendo, he was lost among many other quite interesting representatives of this genre. However, we have a very worthy port. In many cases, Zero the Kamikaze Squirrel looks completely different. Graphically this version looks great, some small effects have been added and changed at different stages of the game. What is most pleasant, additional compositions were written that set the pace of the game very well, and all the music sounds much better than on Genesis and perfectly conveys all the actions of the squirrel, his combat skills and acrobatic tricks of a skilled ninja. Also, among the differences, one can note a slightly increased complexity, which also adds excitement. In battle, our flying squirrel uses nunchucks, shurikens, its strong skull, and the ability to soar on air currents. They will also give you a ride on a water bike. Recommended to all lovers of quality platform games, colorful characters and those who want to renew their feelings from the adventures of their favorite character.
‹
›
Home
View web version