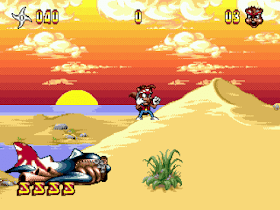 Genre: Action
Perspective: Side view
Visual: 2D scrolling
Pacing: Real-time
Gameplay: Platform
Interface: Direct control
Setting: Fantasy
Published by: Sun Corporation
Developed by: Iguana Entertainment
Released: 1994
Platforms: SEGA Genesis / Mega Drive, Super Nintendo (SNES)
A fascinating platformer about a brutal squirrel named Zero. Over fifteen levels, you will save your native jungle from an evil industrialist who set out to turn the forest into paper. Unusual combat mechanics under the guise of ninja technique and the ability to pilot sharply are the highlight of this game. The little squirrel also collects a variety of food, for which additional points are awarded at the end of the levels. Colorful, pleasing to the eye levels are rich in secrets, for the search for which you will spend many pleasant minutes.
‹
›
Home
View web version