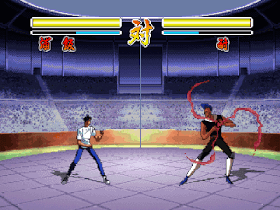 Genre: Action
Perspective: Side view
Visual: 2D scrolling
Art: Anime / Manga
Gameplay: Fighting
Interface: Direct control
Published by: Tomy Company
Developed by: Hudson Soft Company, Tose Co.
Released: 1994
Platforms: 3DO Interactive Multiplayer, SEGA Genesis / Mega Drive
The game is based on the manga of the same name (and anime of the same name) Yuu Yuu Hakusho, created by Yoshihiro Togashi. The manga was published by Shueisha in Shonen Jump magazine and consists of 175 chapters and 19 volumes. Most of the video games based on the YuYu Hakusho anime were published and sold primarily in Japan. The games have been developed for gaming platforms such as Game Boy, Super Nintendo, Sega, 3DO and some others. None of the games have been adapted for English-speaking players from North America, Europe and Australia. The game is a 2D fighting game.
‹
›
Home
View web version