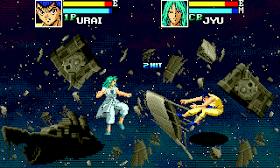 Genre: Action
Perspective: Side view
Gameplay: Fighting
Art: Anime / Manga
Published by: SEGA Enterprises Ltd.
Developed by: Treasure Co.
Released: 1994
Platforms: SEGA Genesis / Mega Drive, 3DO Interactive Multiplayer
Quite good, fighting game based on the popular Japanese Manga and Anime called YuYu Hakusho. Telling about life, or rather about life after the death of Yusuke Urameshi. He takes part in the tournament. That's in this game you have to take part in the tournament. The game features 11 characters: Sensui, Jin, Jyu, Genkey, Kuwaha, Urai, Kurama, He Ei, Shaku, Toguri, Toguro. Each character has special properties, features, techniques and combo strokes. A feature of these anime battles is that you can not only fight two by two, but also three more. And against each other, that is, each for himself.
In Japan, the game is called Yuu Yuu Hakusho: Makyou Toitsusen.
In Brazil, the game is called Yuu Yuu Hakusho: Sunset Fighters or YuYu Hakusho: Sunset Fighters.
‹
›
Home
View web version