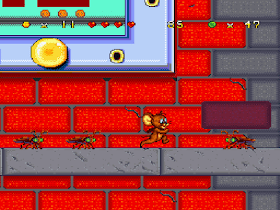 Genre: Action
Perspective: Side view
Published by: Hi-Tech Expressions
Developed by: Riedel Software Productions
Released: 1993
Platforms: Super Nintendo (SNES), Nintendo (NES)
In the game, you control Jerry, who runs around the levels, collecting cheese and throwing some green things of undetermined origin at the surrounding fauna. In the 2-player mode, Jerry's assistant is Tuffy the little mouse (turn-based play). The graphic design of the game is quite average, which is why it is hardly possible to call it outstanding. Although, in general, there is nothing particularly bad to say about this game.
‹
›
Home
View web version