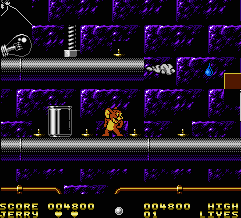 Genre: Action
Perspective: 2D scrolling
Gameplay: Arcade
Published by: Hi-Tech Expressions
Developed by: Software Creations Ltd.
Released: 1991
Platforms: Nintendo (NES), Super Nintendo (SNES)
Fun game about funny "friends." Jerry have to save the baby's Tuffy, who sits in a trap in the attic. It is necessary to overcome the way - from the basement to the roof, but you will meet a lot of enemies and surprises, chief among them is Tom. To complete a level, something where you have to think twice. Well animated protagonist. Good music from the series.

To find an exit in the basement, go up, go to the right and go down, and then go right again. Go upstairs and find the outlet to the water pipe.
In water pipes it is necessary to kill only moving beetles. In stationary beetles and snails, throw a few balls. By the way, for every hit you get points.
Beware of dripping water. They can push the mouse to the enemy. Jump when you approach them.
Having met with a cat, shoot it in a jump. In Tom you need to hit six times.

Before you jump anywhere, you need to destroy the swarming flies, as they are able to push the mouse into the paws of the more terrible enemies.
Do not jump down a great distance-you will break. Too near a standing opponent is better to jump.
Climbing the wood, eaten by termites, stick to the right side - here you will find a mink stuffed with cheese. Pressing Up will allow you to enter the hole.
To drive a sleeping cat, blocking your path, shoot at the hornets' nest and set it on Tom, shooting it again. A three-fold repetition of this operation will result in the desired result.

Go down to the attic, go downstairs and climb to the roof again. Climb into the chimney. Go down the chimney 'to the left. There you will find a mug with water. She needs to extinguish the flames. You can only jump through the extinguished flame.
To pacify the cat at this level, you need to hit it 25 times.

Jump over the blue balls. On the left above you will find a drill, drill a hole at the very bottom. However, stage 4-2 can be done without a drill. Go close to the wall and press the joystick at the same time in the direction of the wall and Turbo A. Jerry with a gnash will leak through the wall.
Be careful not to get into electric shock. See how it moves.
The cat is also calculated. He does not have the mind to stick out in different ways. Use the monotony of his actions.

In the pantry, you first need to find the key, then find the exit (it's in the upper right corner).
The cat again is natural. It appears in a certain sequence. Hit it 50 times and Taffy will be released.
‹
›
Home
View web version