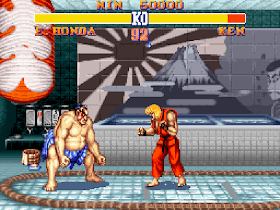 Genre: Action
Perspective: Side view
Visual: 2D scrolling
Art: Anime / Manga
Gameplay: Fighting
Interface: Direct control
Published by: Capcom U.S.A.
Developed by: Capcom Co.
Released: 1992
Platforms: Super Nintendo (SNES), Arcade Machine
Legendary fighting game from Capcom. Street fighters from different countries compete with each other for the title of the strongest in the world. Each of them with their own style and technique of warfare. Classic gameplay that was copied and borrowed by many other fighting games. And the development of the genre began with Street Fighter. Although the Super Nintendo has more improved sequels, this one is also recommended for everyone without exception to get in touch with the story. Game for 1-2 players with many modes.
‹
›
Home
View web version