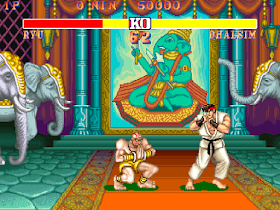 Genre: Action
Perspective: Side view
Gameplay: Fighting
Visual: 2D scrolling
Art: Anime / Manga
Interface: Direct Control
Published by: Capcom Co.
Developed by: Capcom Co.
Released: 1991
Platforms: Arcade Machine, Super Nintendo (SNES)
The structure of the combat system of the game basically follows the basic principles laid down in the original Street Fighter. The player conducts a series of battles one on one with computer opponents or with another player, whose goal is to win over an opponent for a certain time during three rounds. If both fighters knocked out each other, or they had an equal amount of health at the end of the allotted time, they are counted as a double knockout or a draw, and additional rounds were conducted according to the instant death rule, that is, before the first knockout. Thus, the fight could last ten rounds, if there was no clear winner (in the Champion Edition update this number was reduced to four). If it was not determined after the end of the final round, then in the battle the computer opponent is awarded the victory, if in a battle against another player both are counted the defeat.
After every third battle during a single pass, the player gets to the bonus levels for earning points: breaking the car (very similar to the similar bonus level from Final Fight); knocking down the falling from the conveyor to the player barrels and breaking the "mountain" from the barrels of fuel. Bonus mini-games were later removed from the arcade version of Super Street Fighter II Turbo, but were included back into the game version for Game Boy Advance.
As in the original game, the player uses the 8-axis joystick to perform jumps, squats, movements relative to the opponent and defense against the opponent's attacks, and six buttons for the attacks - three under the blows and three under the kicks, successively different speed and power - light, medium and strong. The player can perform basic attacks from any position, including throws and grabs that were not in the original Street Fighter. As in the original game, the player can perform special tricks, using a special combination of joystick and buttons.
Soon after the release in the game, a bug was discovered that allowed the player to cancel the animation of one reception by performing another technique, thus making possible the combination of basic and special techniques. This phenomenon, which became known as a combo, was later translated by the developers into subsequent games and became one of the standard foundations of the fighting system in fighting games.
‹
›
Home
View web version