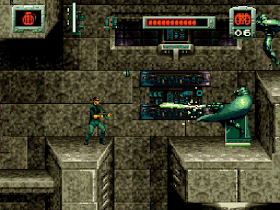 Genre: Action
Perspective: Side view
Visual: 2D scrolling
Gameplay: Arcade, Platform, Shooter
Published by: Acclaim Entertainment
Developed by: Probe Entertainment Ltd., Tantalus Interactive Pty.
Released: 1994
Platforms: Super Nintendo (SNES), SEGA Genesis / Mega Drive
The Stargate was found and, as a result, activated. A special detachment was given the task to go through them and find out where they would lead ... And then the moment came when the ambitious plans of the earthlings came true and people passed through these gates. It was only when they landed on an unknown planet that they turned from military researchers into prey for the race that dominates that planet. The detachment is broken, its members are captured. Only Captain O'Neill managed to escape capture, who did not abandon his comrades and went in search of them, armed with a machine gun, grenades and a brave heart. The game was created based on the movie of the same name.
‹
›
Home
View web version