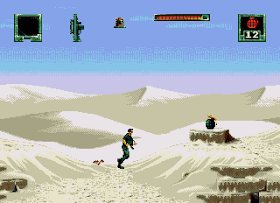 Genre: Action
Perspective: Side view
Visual: 2D scrolling
Gameplay: Arcade, Platform, Shooter
Published by: Acclaim Entertainment
Developed by: Probe Entertainment Ltd.
Released: 1995
Platforms: SEGA Genesis / Mega Drive, Super Nintendo (SNES)
Games for sensational films initially have a special appeal for most gamers. Usually their genre is defined as an adventure thriller. Screen prototypes from personally cope with the function of advertising, but is the always advertised product worthy of expectations? Graphically, the console's capabilities allow us to paint landscapes in a colorful and authentic manner on the screen, and to qualitatively project the scanned images of the characters. However, not at all for any movie is possible a game embodiment. At least, without a serious revision of the plot. The game "Stargate" with the film has much less in common than expected, which, in general, is good. It is too slow in him to unfold the action, and the battle scene is clearly shown only one - in the final disassembly. You know, this is not enough even for the average pre-set militant ... Praise the creators, you will not be bored in the game. At least, first time. Not one hour will pass before the last of many missions will be performed. The scenery is replete with small details and is replaced quite often, enemies and musical accompaniment are not so diverse, but my eyes and ears are not corrupted (I especially liked the winged people and one melody, very well written out in the style of Michel Jarre). In the process of the game begins to irritate some monotony of missions - they all boil down to searching in the labyrinth of a number of things or people. The ways of moving along the level and decoration, however, change with time - stairs, doors and lianas give way to teleporters, elevators and handrails.
Armament of the hero consists of grenades and automatic in rifles, to which you can find three nozzles that increase the size of the affected area, the speed and duration of continuous shooting, as well as clips of large caliber cartridges. A sharp throw of a grenade hits the enemy better than a rifle, but their stock is strictly limited, and it's not easy to get into a moving target. At the last levels, there are more effective alien explosive devices. To maintain health will help you first-aid kits (marked by the Egyptian hieroglyph, restore about a third of energy) and life (glass balls).
The remaining two prizes are related to the plot of the film. Let me remind him briefly: a detachment of commandos under the command of Colonel O'Neill passes through an artifact, discovered by a young scientist Jackson, found at the beginning of the century in Egypt, and falls on the desert planet Abydos, where, in addition to the underdeveloped civilization of the ancestors, the Egyptians find the enslaved god Ra in their flesh - a powerful aliens . Ra desired to destroy the planet of the liberated liberators, sending through the Stargate to Earth a hundredfold nuclear bomb from the arsenal of the resourceful O'Neill. The heroes all managed to "steal the devil's machine" and teleport to the ship of the fledgling god (the Egyptians with the fire support of the earthmen carried out the insurrection), after which Jackson managed to return the heroes to his homeland with the help of the clay table found among the aborigines. But in the game, both the bomb and the instruction are broken into seven parts, and these parts are hidden in the numerous corners of the levels. After entering the specified password, you only need to collect the last pieces of the tablet (jump to the right from the elevator leading to Anubis) and bombs (at the bottom of the room with four teleporters, the upper right of which leads to the boss of the game), and win the "right hand" Ra Anubis and the usurper himself (in the film, incidentally, this was not). The way to destroy them is universal - find a room near the battlefield in which you can make up ammunition; choose the place that the grenades will drop into the enemy's head, and with the help of a rifle, keep the defense there, using the explosives in time and avoiding rare radiation attacks. There will be four such fights for the entire game, and each time O'Neill will need at least twenty grenades.
On the background information screen, in addition to a brief mission statement, the following is indicated: the number of lives and continuations (the latter depends only on the difficulty level), the pieces of the tablet and the bomb found, the password (for the entire game changes only five times, although there are about 60 labyrinth levels, and even more than missions ...). Three numbers under the password indicate your coordinates at the level and its number. This is clearly the result of the forgetfulness of programmers, but can greatly facilitate your orientation.
To get immortality, in pause mode, press A + C + Start.