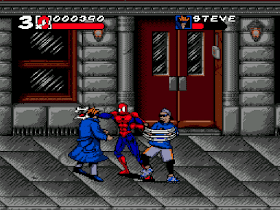 Genre: Action
Gameplay: Beat 'em up / brawler, Fighting, Platform
Published by: LJN
Developed by: Software Creations Ltd.
Released: 1994
Platforms: Super Nintendo (SNES), SEGA Genesis / Mega Drive
A beetmap featuring Spider-Man and Venom based on the comic book series in which Carnage (the red symbiote) and his gang (Shriek, Doppelganger, Demogoblin, Carrion) attack New York City. Spider-Man and Venom decide to unite and together they confront a gang of scumbags. The gameplay is standard - we run forward and beat everyone in a row, at the end of the level the boss is usually waiting for us. There are also original levels: for example, you need to climb onto the roof, dodging shots.
The game is quite difficult. By the end of the game, bosses appear more often in levels. The only thing that makes the game a little easier is the assistants, who are summoned with one button and either destroy all enemies or deal decent damage to them. Graphically, the game is excellent. Stylistically, the game resembles a comic book. In general, if you like Spider-Man games or good beatmaps, then you will be satisfied either way.
‹
›
Home
View web version