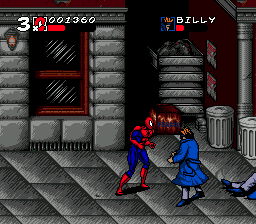 Genre: Action
Perspective: Side view
Gameplay: Beat 'em up / Brawler, Fighting, Platform
Published by: Acclaim Entertainment
Developed by: Software Creations Ltd.
Released: 1994
Platform: SEGA Genesis / Mega Drive
Great game based on the classic comics of the company Marvel, narrating about the epic confrontation of superheroes and various kinds of mutants and other villains. You have to get used to the role of a real superhero and once again save the world from another misfortune. The process of saving the world is very well decorated graphically and at the same time excitingly interesting - the game simply does not come off.
Once Peter Parker was bitten by a mutant spider and mutated himself. No, he did not become a sinister eight-handed monster. High moral qualities of the hero allowed him, when receiving supernatural abilities, to preserve human charisma and to direct new properties to fight against the world evil. Parker became a superhero and, as a consequence, a character of numerous comic books, cartoons and computer games. Before you one of them. In it, Spiderman and his rival mutant journalist Venom are confronted by a band of sinister Carnage. Of course, the main enemies are not exactly people either. All of them were victims of unsuccessful laboratory studies, received their radiation charge on time, or, at worst, purchased a special suit. So Carnage arbitrarily changes his hands on different piercing-cutting objects. The main ability of Spider-Man is to climb walls and throw out cobwebs. His companion Venom is a little stronger and more clumsy than the main character. For the satellites are open different secret levels and you several times have to make a choice for someone to continue the game. In any case, in the most difficult places Venom will come to the aid of Spiderman, and Spiderman to Vienna. For this it will be enough to find the ally's call icon. In addition to the main companion of the hero will support an entire army of friendly mutants.

Cross - move in the corresponding direction.
Double tap on - run.
A - blow, with a quick press - combo, near the subject - pick up the object.
B - jump.
Forward + B - normal jump.
Back + В - somersault.
A + B - super shock, takes away energy.
C - with a short push Spider man briefly entangles the enemy, with a long hero creates a shit in front of him.
Rt ( Up + C - Cobweb shot up. Then you can climb it.
Diagonal + C - shot spider web for movement.
B, then C - jumping in the jump.

You have to make sure that New York is the criminal capital of the world. However, the case, perhaps, in the escaped Carnage. One way or another, they will have to beat all the others. The main threat is represented by two female karate girls. Fighting them with fists is somehow awkward. Use double webbing. At the top of the level, Spider-Man will find an additional life.

As you know, Spider-Man is famous for his ability to climb. This is what he will have to deal with the whole level. The two main dangers are the helpers of Carnage: Shrik and Dopelganger. The first - shoots from the blaster from the roof, the second - the double-twisted hero of our hero - moves along the web. Follow the arrows, they will help you avoid the rays of Shrik. Be especially careful when approaching the roof, where Dopelganger waits.

The fight with Doppelganger is an activity that you will soon get used to. At the first collision it is necessary to keep in mind that six hands are not a joke, and at any cost avoid capture. Continually move deeper into the screen and back to the fore, maneuver and necessarily tear off the tank from the surface - this is a great weapon against a double.
In any case, Shrik will throw you off the roof. Apparently because the continuation of the adventures is there.

The street is flooded with aggressive teenagers. Be sure to collect hearts, near the first glass booth, climb the wall, life awaits you there. At the end of the road is a fat man with a club. Supernatural dexterity will allow Spider-Man to defeat the enemy, but in its place will appear two of the same. Fat men at the end of the alley and will not be transferred, no matter how much you beat them. Need help: Dagger will deal with the enemies, and Cloac will transfer the beaten superhero inside the building.

Inside you again waiting for Shrik and Dopelganger. It is extremely difficult to fight with both at the same time. Shrike - the only one of all the bosses is not able to resist the grips and spider webs. Disarm it and do Doppelganger.
Then you will face a choice: if the next two levels play for the Spider, the road will be somewhat easier. Venom himself is stronger, more dangerous and obstacles that will fall on his way.

The hero pursues the demon. As the chase happens high above the street, one accurate blow is enough to win. Importantly, carefully follow the arrows indicating the direction of motion.

The chase ended, and a fight with the demon began. Near him he always manages to strike earlier, at a distance he throws pumpkin bombs. You'll have to dodge a lot and jump. If you find the Cloak icon, call the ally at the same time by pressing three buttons. The battle will not be so difficult, if at the previous level you have thrown the demon, and not vice versa.

Venom, as expected, will be more difficult. The streets are flooded with punks, and much more dangerous, aggressive girls. At the end waiting to get tired of fatty. Fortunately, under the sign of the bank is life.

Shrik and Dopelganger are also giving no rest to Vienna. Use the same tactics as the Spider-Man, but do not forget that the second character is noticeably inferior to him in speed.
You played for one of the heroes and you can decide who to continue the game with. Their goal is to steal a cannon from the laboratory, which will help to deal with Carnage.

In New York everything is as usual: thugs more and more, life lies at the top of the level. Instead of fat men at the end of the level, two old men with umbrellas are waiting. It is better not to approach them closely. It's good if you manage to push your grandfathers with your foreheads. You will get a life, the old people will quickly bend, and the conscience will not torment. Otherwise they will have to throw them at each other for a long time.

This is the name of the night club. At the beginning of the level, be sure to find the life and icons of the call of Cloac and Dagger. All this will be just necessary when you stumble upon the encountered Doppelganger, Shrik and the demon. Rather, Shrik, like a lady, lingers, so try to deal with two enemies before she appears. Use a strike with a take-off, combo and super-blow. Do not forget to share the victory with your friends, Cloak and Dagger.

Somewhere here is stored an ultrasonic gun, so necessary for our heroes. The main thing is not to allow flying ball-shaped robots to surround themselves.

You were noticed: the alarm went on, and the energy barriers were activated. Through them you can still skip ahead and do it better, otherwise you'll have to start again.
Muzzoid is a huge robot that will try to stop you. When the hero is on the wall, the bully can not hurt him. He is only able to strike his fists with his fists to the floor so that you fall down. This moment is the most suitable for impact. Beat the Muzzoid and quickly return to the wall.

This is a very difficult level. Five boss mutants attack the hero. Fortunately, not at the same time: first the demon and Dopelganger appear, then Carnage himself, accompanied by Shrik and Carrion. Try to drop someone down with a jog. The ultrasonic gun remains with your ally (Spidermeia, if you play for Venom and vice versa). Call him for help by finding the appropriate icon on the tree.

In the park, too, to restore order. To the usual troublemakers, gangsters join, but to beat them. Fortunately, it is not very difficult. Collect the hearts and badges of Venom (Spiderman) and Morbius. The latter is on the tree at the beginning of the level.

On the tree to the left hang badges Dagger, Firestar, Deadloka and Cloaca. There are no new enemies here, and your friends will understand their old acquaintances without any special problems.
You again choose whom to continue.

Prisoners rebelled and pacified them will have Spider-Man. It's frightening that the fugitives took the weapons away from the guard. It's not easy to fight with your bare hands against the pistol, but fortunately, criminals shoot badly and often fall into their own. (Or they just take the old scores back).

Shrik found somewhere two punks and decided to get rid of the superhero. It is fought much better than at previous levels: with the slightest need of escapes, and then rushes at you from above. To avoid a collision, dodge or use a super strike.

All that is needed here is to fight. In time, collect allied badges and save them for the most dangerous situations.
The level of Manhattan Street 2 for the two heroes is common. Venom by that time is taken prisoner to Carnage. To release him and get to the secret level, when you see the superhero hanging over the fire, alternately press buttons A and B.

This is the continuation of the battle with Carnage. You can switch between Venom and Spiderman. The boss was much stronger. Against him help push with a running start and combo. You can beat the enemy right after switching from one hero to another. A few seconds you will be invulnerable.

Carnage is still alive, but for how long, if you continue to use familiar tactics.
This is the game's horses, but, of course, not the end of the feats of real superheroes, who once again saved the world.

Iditol to the right, rise on the cobweb above the extreme window and jump down. Turn to the right.

Available only for Venom. At the beginning of the level, shoot the web on the diagonal and move to the left. On the second web jump to the circle and the arrow on the wall. This secret room will help you overcome energy barriers.

Rise above the camera with the inscription "Solitary 27" and jump down, pressing Up.

Only available to Spider-Man. Do a back flip to get to the glazed ceiling. Stand at the entrance, turn to the right and wait for Carnage.
‹
›
Home
View web version