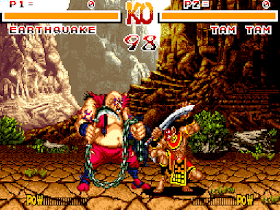 Genre: Action
Perspective: Side view
Visual: 2D scrolling
Art: Anime / Manga
Gameplay: Fighting
Setting: Japan (Ancient / Classical / Medieval)
Narrative: Martial arts
Published by: TAKARA U.S.A. CORP.
Developed by: SNK Corporation
Released: 1994
Platforms: Super Nintendo (SNES), Neo-Geo, SEGA Genesis / Mega Drive, 3DO Interactive Multiplayer
A very worthy implementation of the hit from SNK on the Neo-Geo system. The game retained many of its features, which the Sega Genesis version, where this fighting game was severely cut, could not do. This time Takara did her best. The Super Nintendo version has great graphics and sound effects, animated intros, and all sorts of character art that was missing from the Genesis. The combat system is excellent too. Each character wields their own melee weapons, has their own special moves, and some even use the help of animals. Each strives to outdo his opponent by firmly holding his steel blade in his hands, which sometimes does not work. Although the game looks much better on its native Neo-Geo system, the Snes version also supports all the frameworks of a high-quality fighting game, a masterpiece and a hit. It is interesting and exciting to play, you can even say that the game has acquired somewhere its own unique style, different from other versions of this game and even the original. Recommended to anyone who loves quality fighting games and sword fights. Excellent implementation!
‹
›
Home
View web version