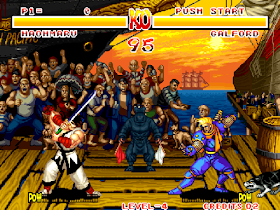 Genre: Action
Perspective: Side view
Visual: 2D scrolling
Gameplay: Fighting
Art: Anime / manga
Setting: Japan (Ancient/Classical/Medieval)
Narrative: Martial arts
Published by: SNK of America
Developed by: SNK Corporation
Released: 1993
Platforms: Neo-Geo, SEGA Genesis / Mega Drive, 3DO Interactive Multiplayer, Super Nintendo (SNES)
This fighting game is based on the samurai wars. There are twelve of them in total. Each is endowed with their own unique weapons. This is the peculiarity of the game. During fights, fighters drop their swords and fight without them. If necessary, weapons can be picked up. From this, the fights look even more spectacular. In addition to the usual techniques, characters are endowed with special attacks that accumulate during battles. The dynamic movements of the fighters are quite high-quality traced and look beautiful. At some stages, unnecessary items may be lying around that can be chopped into pieces during fights. This decorates the design of the locations. One cannot fail to note the good sound that accompanies each blow of the sword.
‹
›
Home
View web version