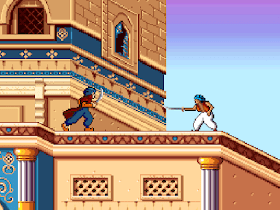 Genre: Action
Perspective: Side view
Visual: 2D scrolling
Gameplay: Platform, Puzzle elements
Setting: Middle East
Published by: Titus Software Corporation
Developed by: Broderbund Software
Released: 1996
Platforms: Super Nintendo (SNES), DOS
The game has nice graphics and music, the action has become even more energetic, from the first minutes the prince jumps out of the window, deals with the guard and, with all the dexterity available to him, jumps after the slowly sailing ship. Many additional moments, all kinds of traps, and most importantly, colorful locations with landscapes of the endless desert east with its adventurous appearance and mysteries have been added. An excellent game is accompanied by small plot inserts. There is a slight feeling that the game in some places departs from the classic canons. Although it's still nice that Snes implemented a continuation of the beloved prince with his classic gameplay and all sorts of acrobatics. According to the plot, the action of Prince of Persia 2 begins 11 days after the end of the story of the first part of the game. Evil Jaffar did not even think of dying, he was rescued by knowledge of black magic. He becomes a doppelgänger of the prince and changes his appearance. The real prince barely manages to escape. Later, Jaffar still achieves his goal and seizes power in Persia, and the princess falls mortally ill. To unravel the whole string of this story, we are offered to plunge into this next exciting adventure. Whether the princess survives or not, all this seems to be learned again in the allotted period of time.
‹
›
Home
View web version