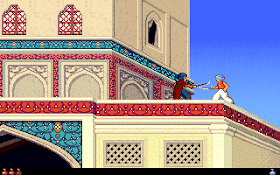 Genre: Action
Perspective: Side view
Visual: 2D scrolling
Gameplay: Platform, Puzzle elements
Setting: Middle East
Published by: Broderbund Software
Developed by: Broderbund Software
Released: 1993
Platforms: DOS, Super Nintendo (SNES)
In the distant Persian lands, a once powerful and wise sultan ruled. And he had a beautiful daughter. Her beauty captivated anyone at first sight ... Once the sultan gathered his formidable army and went to the next war, and entrusted control of the country to his vizier Jaffar. But he did not know that the old sinner had long dreamed of becoming related to him, taking a princess as his wife. Soon after the Sultan's departure, a young tramp made his way to the princess's garden - and, of course, was fascinated by her beauty. And he himself managed to please the princess. Suddenly, the guards attacked the young man and, twisting the poor man, threw him into prison. In the evening of the same day, Jaffar announced an ultimatum to the princess - to become his wife or die. But the young traveler managed to get out of the damp basements of the palace and hack to death the insidious vizier ... So it was in the first part of the Prince of Persia series - and it seemed that later the princess and her lover lived happily ever after, but ...
Yes, the sultan liked the brave young man, and he blessed his daughter to marry him. And yes, the wedding took place. But on the eleventh day, the evil spirit of the murdered vizier wanted revenge and turned into a double of the newly-minted prince, and turned him into a ragamuffin. The prince fled from the guards to unknown lands - and on the princess Jaffar put a terrible spell, and she was seriously ill ... Now the prince must return to Persia to save his beloved wife and punish the stubborn villain Jaffar!
The continuation of the series kept pace with the times. The first thing the player pays attention to is noticeably prettier graphics, which have replaced the minimalistic picture of the first part, and enchanting oriental music, which changes depending on the events taking place on the screen. The control has changed, since the game has new technical functions (for example, there are more slots for saving), and the prince now takes out the saber on a separate command, whereas in the first part he did it automatically. But the physics and dynamics have remained the same, so after the first part you don't have to get used to the second for a long time.
The world of the game has transformed and grown: outside the walls of the dungeon and the palace and far from the Sultan's possessions, the prince will visit caves, in ruins (where, by the way, both he and the player will be surprised) and look into the ominous temple of the god Horus. It also has new obstacles - even more diverse and dangerous enemies, an enriched arsenal of traps, cunning riddles and intricate labyrinths ... The time limit has also increased (besides, the countdown does not start right away).
In view of all of the above, it has become much more difficult to play. However, it is worth taking into account both the improved visual component and the presence of spectacular plot screensavers in the game in order to understand: it has become not only more difficult to play, but also more interesting! Trying on the trousers of the prince of Persia in exile, you will not be deprived of impressions and get acquainted with the brilliant continuation of the legendary arcade saga ...
‹
›
Home
View web version