The Pirates of Dark Water (SNES) 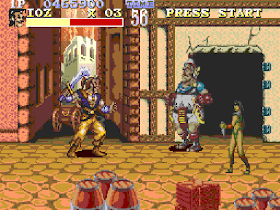 Genre: Action
Perspective: Side view
Gameplay: Beat 'em up / brawler
Published by: Sun Corporation
Developed by: Sun Corporation
Released: 1994
Platforms: Super Nintendo (SNES), SEGA Genesis / Mega Drive
A game based on the cartoon The Pirates of Dark Water. It is a brief retelling of the events of the cartoon, where Prince Ren, the son of King Primus, the future ruler of Octopon, must find 13 Treasures of Rule in order to destroy Dark Water, save the planet Mer and revive his kingdom.
This game is a Beat 'em Up where you travel through 9 locations, which are taken from the plot of the animated series, and find the compass and the first 8 Treasures of Rule. On the way you will face numerous pirates led by Bloth and his personal warriors Konk and Mantus, as well as such famous enemies from the animated series as the winged demon Kiroptus, the personal servant of the Keeper of Darkness, and Joat, from whom Ioz stole the ship. You can play with two of three, to choose from, fighters. Balanced Ren, very strong in attack, but weak in speed, Ioz, and very fast, but weak in attack, Tula.
The game has grabs, two types of attacks - fast and heavy - grabs, super-hit and a few combinations of techniques. All levels are linear and consist of two stages-sublevels.
‹
›
Home
View web version