The Pirates of Dark Water (SEGA) 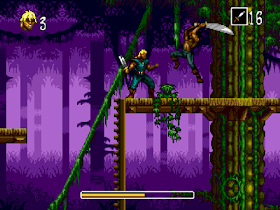 Genre: Action
Perspective: Side view
Visual: 2D scrolling
Gameplay: Platform
Published by: Sun Corporation of America
Developed by: Iguana Entertainment
Released: 1994
Platforms: SEGA Genesis / Mega Drive, Super Nintendo (SNES)
In the game you can choose one of three characters with which you'll have to rip and cut the bad people, alternately smashing crates to collect bonuses. Throughout the game you will help a parrot overgrown. A lot of secret walkthrough.

Ren - Crown Prince Octopon, honest and noble. His mission - to find the thirteen treasures Rullus and save the world from the dark waters, using their magical powers.
Ioz - a pirate, a thief, a daredevil and treasure seeker. Rehn joined when I heard in the tavern talking about Ren and Niddler treasures. Since then, constantly grumbling that the gold in this adventure, you can only lose, but not to find, but, carried away by the noble aim of Rennes, he continues to look for treasures Rullus with him.
Tula - girl ekomanser, plants and commands the elements. He joins the team having the bosom secret motives - to release her from captivity Bloth tribesman Teron, exchanging it for a magic compass and the first treasures Rull. Later, I realized that you can not trust Bloth and returned to the side Rennes.

A - blow (with frequent pressing near the enemy gives your hero the opportunity to fence with weapons). If you simultaneously press UP + A, then there will be a crown, but energy will be taken away.
B - jump (double-tap will flip - this will allow you to jump higher and kill flies in flight.) If you can press DOWN + B or UP + B simultaneously at the same platform, you can jump or jump onto another platform. the first stage is to take many lives.
C is the use of the object.

Stone Elixir - freezes opponents.
Gravity Potion - the range of the jump increases (it is convenient in some cases).
Shield Magic - armor, it can be different.
Some Food is food (replenishment of energy).
Vitality Enhancer is the heart (increases the energy band).
Key is the key.

The main task is to go through and stay alive (a good motto, is not it?). A threat to you is represented by nets with stones that open inadvertently, men with huge swords, as well as healthy children with clubs (be careful, they can throw the net.) To break it, if you're caught, press A several times). In this stage, there are many secrets: one is immediately after the monkey. After talking with her, go to the big tree in the background and press DOWN + B simultaneously. Then you can choose one of 2 stages.Coins are coins (they are coins in Africa).

The first part of the stage does not differ from Stage 1 in any way. But in the second part, you, at the request of monkeys, should release the kids from the cells (these are the cells in which the chicks jump) and save the queen of monkeys (delirium of some kind!). In addition to the above enemies, here you will fall and roll pots and fly flies (annoying).Boss: a small and vicious pirate Conk. The first six of Blota's pirate. Beating easily, most importantly, go away from his punches with a sword and flying crutches. Killing him, you will free the queen, who will give you a diamond. This is the first treasure.

A gloomy and spooky castle full of rats and bats (they are, by the way, your enemies), as well as skeletons and living dead (fear they shoot spit in the distance). At the beginning of the stage, Death itself meets you. After talking with her, go to the castle. The stage is very rich in secret rooms. I'll give advice: do not play at this stage loz-oh - it is high and it gets spitting mummies, and Rena and Tulu do not. In one of the secret rooms (find it yourself) you will meet new enemies - these are flying ghosts with bows. Upon reaching the end, you will again meet Death, which will invite you to the room with the treasure. But the way to them lies through a corridor with ghosts - be on the alert! Passing the corridor, you enter a room with a statue, in whose hands lies the treasure. There are two chests in front of her. Take their contents, but do not touch the stone. Approaching a certain distance, jump over the statue. On the other side there are two more chests. After breaking them, take a stone.

Mountains, mountains and once again mountains. This place is dangerous. But for a real gamer there is no such word "danger". I'll give you some advice (something pissed me off on the advice): play for loz-a. He though slow, but he has a strong blow with his sword. The local natives are a danger here. Some of them jump, run, trying to hit you in the back (they do not seem to know what to beat in the back - it's mean.) Well, it's clear, the natives .The CSD (mental development factor) is 25 percent. In addition to these, there are also types in masks, which shoot from the sticks with darts. There are all the same annoying flies, and in the water piranhas. The first part - a village where the danger is spikes, well, the local aborigines. After flying on an airplane of a local airline, you get to the mountains. Here stones fall on you, and thorns stick out from the floor. There are many secrets. Quite a difficult stage for beginners. (I used to be like that, too. Ah, youth - well, let's not talk about sad things). At the end there are three buttons. Clicking on the desired one, you can awaken the statue, in whose hands you will find a stone.

The city of pirates. Unpleasant place, you know. Well, what can you do? If the creators of the game wished this, then it will be so. Here, men with maces (which, by the way, are jumping) are dangerous, monkey hunters (remember, they are throwing the net). Also there are crossbowmen. Fireflies fly around the streetlights. They take away energy like flies. You need to go from ship to ship, reach the boss. Boss: Hefty horse with a sword (note - pirate). In my opinion, the most difficult boss of the game, since his attacks almost do not have a "dead" zone (this is the zone where you will not get the boss's blows). Killing him, you get a stone. And then: Stage 6. Sunken BridgeWhat is a bridge, everyone knows, but few know how it can be dangerous on it. You need to pass such a bridge. The main problem is created by giant waves that constantly rise or fall, pushing you to the bridge. Besides the waves there is also a bridge guard. With them you need to understand as quickly as possible, so that you do not wash off accidentally. The difficulty is that some platforms are so low that sometimes they are difficult to notice (malicious joke programmers). At this level, I spend many lives, but I find a lot (many thanks to all the same programmers). At the stage there is a secret. In the end, do not go into the tower, but climb higher on the bridges. There you will see a button. Pressing it, go back to the beginning of the stage. Going back, you will find a new platform. Jumping on, climb up. There, after passing to the left, you will see the entrance. Enter, activate the elixir of the jump and jump over the water. On the other side you will find a piece of a sword. At the same time, playing for the prince, you will get the opportunity to kill with one blow. Go back to the entrance and, having entered it, press the key to let the water fall. There lies a diamond.

The birthplace of Tula is a beautiful magical country full of secrets (something was drawn to mysticism). Now this ghostly place is completely under the rule of Black Water. Your enemies in the first part of the stage are monsters in the form of spiders and dogs. Also there are habitual bats (have bred throughout the game). In some places you can meet flying men who freeze you. In places there are puddles of black water, from which small clusters jump out. The second part is significantly different from the first. Here, the action takes place in the former castle, now destroyed by the Black Water. Here your opponents are small fat men with knives, crossbowmen and terrible Black water. There are strange types that spin like a top. As in the Bobo Mountain level, you need to select one of the squares to open the door. The stage is not so complicated, but I do not advise you to relax (well, now it's started again). Play as you like, but preference for loz-ohm. In the end, the boss is waiting for you.Boss: The right hand of the Blot pirate. Fencing with a huge sword and making a turntable. The average boss. After his sudden (I hope!) Death, he will give you a stone. Now go to the most difficult stage.

Fantasies of programmers have no limits.They did not bypass this game either. Imagine a giant pirate ship of bones. (You did not mishear - he really is from the bones). The ship itself Blot - vile, mean, terrible pirate planet Mer (you see how many flaws). Here you will meet all the enemies (except for the natives - these hang out in their village). Going down into the hold, you will find there big monsters and Black water. Be careful: life disappears here like money (found, with what to compare: they are not already there). At the end of the meeting with the boss. Boss: Blot himself in person. Jumps, beats sword, throws barrels. Pretty easy boss, if you find a "dead" zone (and she has it). Killing him, you get the last treasure. And finally:

Darkness, darkness, fear - all this can be called one expression - the realm of Black Water. The shortest and, I think, the easiest stage (yes, yes, do not be surprised - this is a fact). Enemies are huge flying heads that shoot spitting. And also Black water. A lot of falling rocks. I advise you to use your armor. In the end, you are waiting for the boss (someone or something - I personally do not understand until now) - the Black Water itself. Do not try to beat him (her) with a sword or do anything else (to her - water, that is, it's like pea walls, that is - on the drum). It is better to find a special hole in the island, put a diamond there (select the holes in the form). After inserting all six, you finish off the boss. After that, look at the beautiful cartoon about the end of the game. "Fu, I think he said everything."
‹
›
Home
View web version