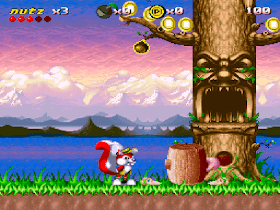 Genre: Action
Perspective: Side view
Visual: 2D scrolling
Gameplay: Platform, Puzzle elements
Published by: Ocean of America
Developed by: Ocean of America
Released: 1994
Platforms: Super Nintendo (SNES), SEGA Genesis / Mega Drive
You control a squirrel in sneakers and a cap. He has to overcome six different levels, each of which is divided into three or four segments. Stages are directly saturated with enemies - spiders, live apples, caterpillars, hornets, live stuffed animals and many others. To fight them, Mr. Nuts uses good old head jumps, as well as picking up nuts and even his own tail. For collecting all the coins on the level, you can get an extra life. In the game we are waiting for beautiful fairy-tale worlds with amazing colorful drawing. There are plenty of secrets here, however, there is not enough password system from the Sega version.
‹
›
Home
View web version