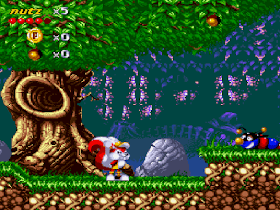 Genre: Action
Perspective: Side view
Visual: 2D scrolling
Gameplay: Platform, Puzzle elements
Published by: SEGA of America
Developed by: Ocean Software Ltd.
Released: 1997
Platforms: SEGA Genesis / Mega Drive, Super Nintendo (SNES)
Very beautiful platformer game about a squirrel. This game appeared on the console due to the fact that the cartridge as a storage medium was more secure than others. The game was originally going to be called Squirrel's Game. But later it was decided to name the game Mr. Nuts finally named the game Mr.Nutz. In the game, you play as a squirrel whose main task is to stop the insidious Mr. Blizzard.
‹
›
Home
View web version