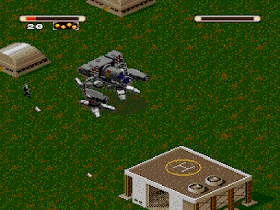 Genre: Action
Perspective: Diagonal-down
Visual: Isometric
Gameplay: Arcade, Shooter
Vehicular: Mecha / giant robot
Setting: Sci-fi / futuristic
Published by: Activision
Developed by: Malibu Interactive
Released: 1995
Platforms: Super Nintendo (SNES), SEGA Genesis / Mega Drive
The gameplay is reminiscent of such games as Jungle Strike, Desert Strike, adjusted for the fact that you have to pilot not a helicopter, but a huge walking combat robot. Just like in the Strike series, you will have to complete different missions, destroying enemy war machines and bases along the way. An interesting feature of the game is the fact that two players can play at the same time: one controls the legs, the other the torso.
‹
›
Home
View web version