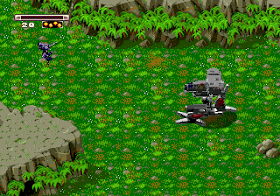 Genre: Action
Perspective: Bird's-eye view
Visual: Isometric
Gameplay: Arcade, Shooter
Setting: Sci-Fi / Futuristic
Vehicular: Mecha / Giant Robot
Published by: Extreme Entertainment Group
Developed by: Malibu Interactive
Released: 1994
Platform: SEGA Genesis / Mega Drive
A fairly famous game, which somewhat resembles Desert Strike and Jungle Strike, but we control the robot. The game takes place in the distant future in the 31st century. Where people depend on new technologies. And now they are fighting with robots resembling robots from the game Front Mission. In the course of the game we have to perform various tasks, destroy something, destroy, etc. During the passage, we have to destroy a large number of different techniques. Particularly interesting in this game is a two-player mode. Here we can not play two robots at the same time, but we can manage one robot together. One player will control the lower part of the robot responsible for movement, and the second upper tower, which is responsible for the shooting. And only thanks to the combined actions of the crew it will be possible to achieve success.
Although the action of the game and unfold in the distant future, its concept was invented back in 1984, FASA Corporation released a desktop RPG. On the basis of which, in 1988, the step-by-step RPG BattleTech: The Crescent Hawk's Inception from Westwood Studios and Infocom was made and made like the Heroes of Might and Magic.
The game is also called: MechWarrior.

The first stage. The goal is to destroy all the radars. Use the map for orientation on the terrain. Press Start to call up the card. Beware of minefields - use Light weapons for the clearance of mines.
The second stage. The goal is to destroy four towers and ten military plants. At your disposal only 160 seconds.
The third stage. The goal is to smash the enemy's research center. Here you will have to learn the basics of figure skating for heavy combat equipment - be careful.
The fourth stage. The goal is to collect 4 component parts of the bomb, which are scattered at different corners of the map. At your disposal only 30 seconds. When all the parts are available, place the bomb at the gate of enemy fortifications and bring it into effect. Then everything is simple - smash everything that is inside the gate.
The fifth stage of the game. The goal is to destroy the robotic boss. Tip - try to keep the maximum resources in the previous round.
To increase the range of throwing a bomb, press and hold the A button.
If you entered the code of infinite ammunition (see below), then having lost all lives and starting the game again, you can enter a password of any level and make sure that the combat stock has remained inexhaustible.
Dial the code for infinite ammunition, exit the options. Return to the password input menu and now you can safely enter the code of any level, while the effect of the ammunition password will be preserved.