The King of Dragons (SNES) 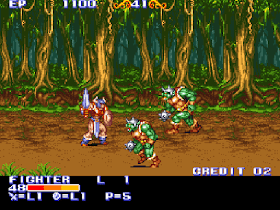 Genre: Action
Perspective: Side view
Visual: 2D scrolling
Gameplay: Beat 'em up / brawler
Interface: Direct control
Setting: Fantasy
Published by: Capcom U.S.A.
Developed by: Capcom Co.
Released: 1994
Platforms: Super Nintendo (SNES), Arcade Machine
An amazing game with nice graphics and music, the action of which takes place in a knightly world inhabited by various mythical creatures. You have to kill a lot of humanoid boars, revived skeletons, monsters from local reservoirs, etc. Even mummies moved here from Ancient Egypt to prevent the heroes from completing the game calmly, without violence and victims. Occasionally, there are traps in the game: slimes - green and burgundy creeping jelly-like creatures that strive to attack the legs and suck the last juices out of the character; vases with ice - after them the character is covered with a thick ice crust, and defrosting costs health; biting chests, striving to chop off your character's ass. Heroes are selected from different classes: Elf, Wizard, Dwarf, Cleric, Fighter - each with its own advantages in attack and defense. They must face many formidable bosses in the struggle for goodness, justice and other unchanging qualities. The combat system does not shine with variety, its main idea is to upgrade weapons and other components of the character. With each new level increase, you can watch how the hero changes weapons or acquires new skills. Sometimes magic can be used to help, bringing down lightning, fire on enemies, or simply turning them from freaks into beautiful and cute toads. You can chase some, suddenly you are lucky and one of them will turn into a beautiful princess. I have not yet expected such happiness, but I am ready to join the fight for goodness and justice in this wonderful game more than once.
‹
›
Home
View web version