The King of Dragons (Arcade) 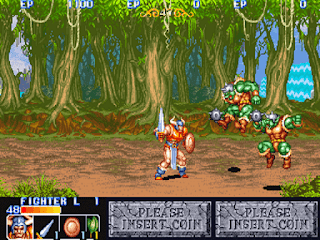 Genre: Action
Perspective: Side view
Visual: 2D scrolling
Gameplay: Beat 'em up / brawler
Interface: Direct control
Setting: Fantasy
Published by: Capcom Co.
Developed by: Capcom Co.
Released: 1991
Platforms: Arcade Machine, Super Nintendo (SNES)
In the game you choose to your taste from 5 characters, different in their characteristics: a fighter, a cleric, an elf, a wizard and a dwarf. Each of the characters has not only unique capabilities, but also their own type of weapon, which, if possible, can be shaken, including the shield. The special moves in the game are somewhat reminiscent of the Golden Axe. After completing the level, if you spent the continuation, you will have the opportunity to change the character. The battles with bosses here are not monotonous: with one the fight is "the one with the most strength, he won", with the other you have to constantly keep your finger on the jump, because he flies, and it's better to keep your distance from the third one, and that's not all.
‹
›
Home
View web version