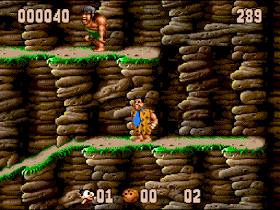 Genre: Action
Perspective: Side view
Visual: 2D scrolling
Gameplay: Arcade
Setting: Prehistoric
Published by: Ocean of America
Developed by: Ocean of America
Released: 1995
Platforms: Super Nintendo (SNES), SEGA Genesis / Mega Drive
This time, the Flintstones game was not made by Taito, which brought the series to a more than worthy level in the gaming world, releasing excellent games on Nes, Sega Genesis and Super Nintendo, but by the equally famous Ocean company. Moreover, this game is not based on the animated series, but on the movie of the same name. Graphics and sound at a more than decent level, the gameplay will seem difficult to many. What to expect from the story of the Flintstones? A strange time - either the prehistoric era, or the distant future, the wonderful town of Bedrock, whose funny inhabitants live either in caves or in super-futuristic dwellings and move in luxury cars, but with the help of their legs. Here everything is mixed up in a heap - tales, horror films, fairy tales, anecdotes, puns, quotes from film classics, ironic comments on the adventures of heroes, the main of which is the handsome good-natured bumpkin Fred Flintstone, on whose head all the bumps are pouring - and everything together has turned into an exciting and funny show.
‹
›
Home
View web version