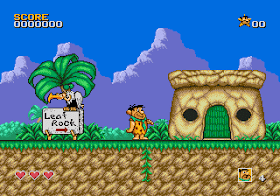 Genre: Action
Perspective: Side view
Visual: 2D scrolling
Gameplay: Arcade, Platform
Setting: Prehistoric
Published by: Taito Corporation
Developed by: Taito Corporation
Released: 1993
Platform: SEGA Genesis / Mega Drive
A game about the Flintstones (who would have thought) ... Fred, armed with a cudgel, runs around the levels and does what the savages of his mental level usually do-he hits everyone with this cudgel, jumps on palm trees and roofs of primitive huts, collects various useful Nonsense. In general, the game is an ordinary walker with good graphics and characteristic music.