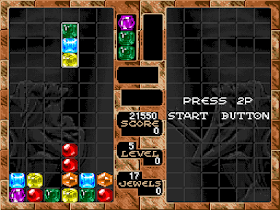 Genre: Action, Puzzle
Perspective: Fixed / flip-screen
Gameplay: Falling block puzzle
Interface: Direct control
Setting: Fantasy
Published by: Media Factory
Developed by: SEGA Enterprises Ltd.
Released: 1999
Platforms: Super Nintendo (SNES), SEGA Genesis / Mega Drive
Very little time has passed since the revolution made by the legendary TETRIS. Not a single game has repeated that resounding success. Although no, there is one. And you know her. Yes, in terms of gameplay and excitement, this game is inferior to Tetris, but it beat him in terms of color, because the idea of the game is very simple - to collect several squares of the same color next to each other. And the SNES versions of these games are especially colorful and attractive!
‹
›
Home
View web version