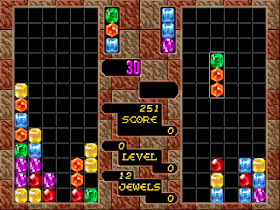 Genre: Action, Puzzle
Visual: Fixed / flip-screen
Gameplay: Falling block puzzle
Interface: Direct control
Setting: Fantasy
Published by: SEGA of America
Developed by: SEGA Enterprises Ltd.
Released: 1991
Platforms: SEGA Genesis / Mega Drive, Super Nintendo (SNES)
An exciting logic game that is made like Tetris, but a little simpler. Colored gemstones act as cubes. Which need to be made side by side of the same color vertically, horizontally or diagonally, from three pieces in order for them to disappear. There is not a large number of different figures, as in Tetris. All figures in this game are a vertical rectangle of 3 gems. The game is designed in Antique Greek style, looks attractive.
‹
›
Home
View web version