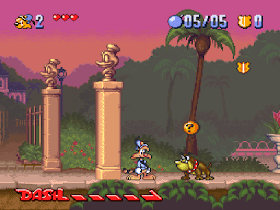 Genre: Action
Perspective: Side view
Visual: 2D scrolling
Gameplay: Platform
Published by: Capcom U.S.A.
Developed by: Sun L
Released: 1994
Platforms: Super Nintendo (SNES), SEGA Genesis / Mega Drive
A game based on the character of the animated series from the Disney studio. I think there will also be fans of this hero. If you played this game on the Sega Genesis and liked it, then by all means play the SNES version, which is better implemented. Graphics and sound are very good. Bonkers runs around different areas, fights off enemies with bombs, jumps on their heads, collects various bonuses. Here's a fun way to reveal all the crimes. Single player game with good standard gameplay.
‹
›
Home
View web version