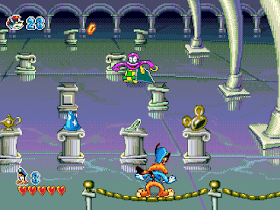 Genre: Action, Racing / Driving
Perspective: Behind view, Diagonal-down, Side view, Top-down
Visual: 2D scrolling
Gameplay: Platform
Published by: SEGA of America
Developed by: SEGA Interactive Development Division
Released: 1994
Platforms: SEGA Genesis / Mega Drive, Super Nintendo (SNES)
Many would like to see another game with such a well-known name as the Bonkers made on the animated series from Disney. But we have what we have - this is an arcade game in which there are 4 types of different games.
Bonkers is fighting for the title of the best officer of the month, so for now his partner Lucky is on vacation. Bonker has to catch four known criminals: Ma Tow Truck, The Rat, Mr.Big, Harry the Handbag. We have to catch them in four arcade mini-games:
The first levels in the game are quite simple, but as you progress through the levels and rise to higher levels, the game becomes more difficult.
‹
›
Home
View web version